This resembles twice the frame rate and resolution offered by conventional HDTV video surveillance solutions today. High frame rates allow for capturing quick movements in detail such as when license plates of fast moving vehicles need to be identified. With full HDTV resolution, large overview areas can be monitored without compromises on image detail as will be required when an incident occurs. 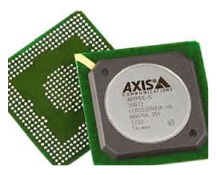 The image quality improvements brought by high-definition TV has been well received and generates great demand in the consumer market. Consequently, a similar trend can already be seen in the video surveillance market. HDTV-compliant network cameras deliver a resolution, color representation, 16:9 aspect ratio and frame rate that are in accordance with international standards, making them an appealing solution in surveillance situations that require high quality images. Working with progressive scan, network cameras with HDTV performance deliver true color representation and clear images even if the object is moving fast. This makes it a highly attractive solution for surveillance operations where greater image detail is required.

Frame size is defined as the number of horizontal pixels times the number of vertical pixels, e.g. 1280x720 or 1920x1080. Given that traditional surveillance normally in 704x576, the visual information on an HDTV is two to five times larger.

Frame rate is defined as the number of image frames per second (fps). For interlaced systems, the number often implies the field rate, which means the number usually is twice as high since there are two fields to every frame.

Historically, one of the thornier issues had to do with a suitable frame/field refresh rate. Countries were divided into two camps - for reasons that very much depend on the frequency of the mains electrical supplies, which in turn affect image stability - favoring either 25/50 fps or 30/60 fps. Nonetheless both systems are compliant with HDTV and consequently also meet the full frame rate requirements of video surveillance.

There are two techniques for scanning: interlaced and progressive.

Interlaced scanning, the technique splits each frame into two so-called fields. The scanning starts at the top-left corner and sweeps all the way to the bottom-right corner, skipping every alternate row on the way. There are some downsides to interlaced video. For instance, if objects are moving fast enough they will be in different positions when each individual field is captured. This may cause what is called motion artifacts.

Progressive scanning, the technique captures, transmits and displays all lines in the image in a single frame. Scanning is done line by line, from top to bottom. In other words, captured images are not split into separate fields like in interlaced scanning so there is virtually no “flickering” effect.

In a surveillance application, this can be critical for viewing details within a moving image such as a person running or a vehicle moving. Another benefit of this technique is that single frames can be used to make paper copies with almost photographic quality. 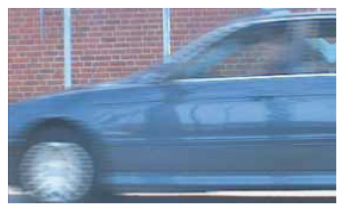 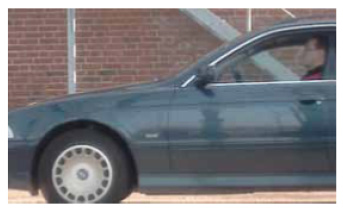 Today, the most important HDTV standards body is the Society of Motion Picture and Television Engineers (SMPTE). The group, recognized as the global leader in the development of standards and authoritative practices for film, television, video and multimedia, has defined the two most important standards: SMPTE 296M and SMPTE 274M.

A Day/Night camera is designed to be used in poor lighting environments which delivers color images during the day time and automatically switch to night mode to make use of near infrared (IR) light to deliver black and white images when light diminishes. Maintaining image sharpness and low noise, particularly in poor lighting conditions, has proved challenging.

Axis have led to the introduction of the new and revolutionary Lightfinder technology. The Lightfinder technology incorporates a CMOS sensor with exceptional light sensitivity, as well as Axis proven image processing, the elaborate software sets the degree of filtering and sharpening to give the best image quality possible. The outstanding performance in low light is the result of well-founded decisions regarding the sensor and lens combined with carefully tuned image processing. 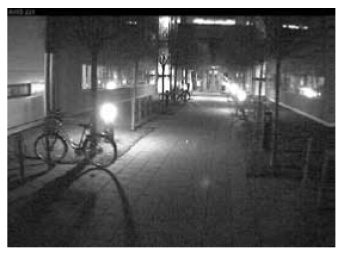 A Day/Night Camera at building entrance surveillance during night time (11:50 p.m.) and illumination ranging between 4 and 6 lux. 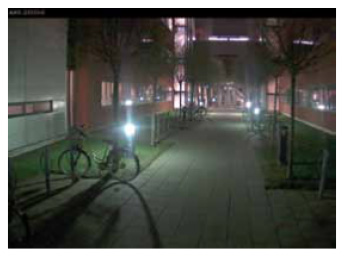 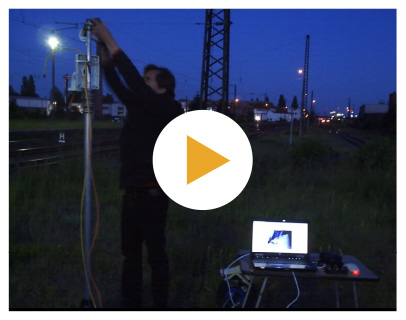 In nature, there are dynamic ranges that extend further than the camera or the human eye can perceive. An example is when you take a photo of a person in front of a bright window. The camera could either expose the person properly, rendering the scene through the window all blown out, or prioritize showing what’s outside the window leaving the person underexposed and dark. The dynamic range between the person and the scene outside is wider than the camera can handle.

WDR (Wide Dynamic Range) is a technology where the camera’s range is extended to cover a greater span between bright and dark areas in the image.

A totally different technology from Axis to increase the capabilities of WDR, is called Dynamic Capture WDR.

Here, the camera takes several images in fast sequence with a different exposure level for each image. These pictures are then combined in a composite, where both the brightest and the darkest parts are kept.

This image has a much higher bit depth, higher than a computer screen can handle. Shooting several images in the time span normally used for one image requires an extremely fast and sensitive sensor. This technology exists today in some Axis cameras.

If you have scenes with big differences between brightness and darkness, make sure to check that you have activated the WDR capability in your camera. This capability can make huge difference. For demanding scenarios you might have to use a camera with advanced WDR capability, such as Axis Dynamic Capture WDR. 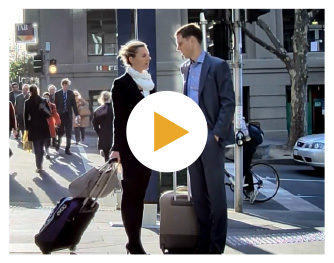 Axis Communications has led to the introduction of a new and revolutionary precise iris control, P-Iris. P-Iris optimizes the iris opening under all lighting conditions and the result is images with better contrast, clarity, resolution and depth of field. In short, P-Iris means improved image sharpness and increased image usability for net¬work video surveillance operators.

P-Iris is a new type of iris control that is both automatic and precise. Unlike a DC-iris lens, the main task of the P-Iris control is not to continuously adjust the flow of light through the lens. The primary objective of P-Iris is to improve image quality by enabling the optimal iris position to be set so that the central and best performing part of the lens is used most of the time. This position, expressed as a specific f-number, is where the lens performs optimally, where many optical errors are reduced, and where image quality (with regards to contrast, resolution and depth of field) is at its best. This is the default setting in a net¬work camera with P-Iris.

Working in conjunction with P-Iris is the use of electronic means—gain (amplification of the signal level) and exposure time—to manage slight changes in lighting conditions and to further optimize an image. This allows the optimal iris position to be maintained as long as possible. In situations when the preferred iris position and the camera’s electronic processing capabilities cannot adequately correct the exposure, a P-Iris camera will automatically instruct the iris to move to a different position. In dark conditions, for example, the iris will fully open. In bright situations, a camera with P-Iris is programmed to limit the closing of the iris to a position that avoids diffraction or blurring, as explained earlier. Hence, in all lighting conditions, P-Iris can automatically make adjustments to deliver optimal image quality. 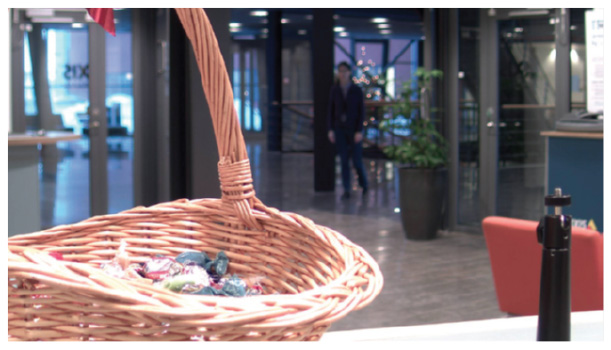 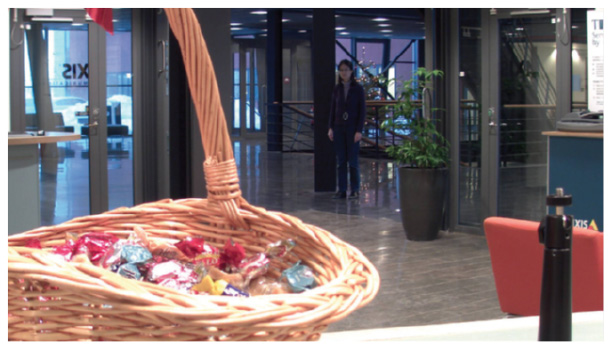 P-Iris is an innovative solution that truly allows a network camera—particularly a HDTV network camera—to perform optimally in all lighting conditions. It enables the delivery of crisp, high-resolution images with good depth of field. It can also avoid diffraction in bright situations. Furthermore, it does it all automatically, which is highly valued in outdoor video surveillance applications.

Axis smart and unique Optimized IR solution based on new, power-efficient LED technology and providing optimized image quality with an adaptable angle of IR illumination. The IR technology is designed for easy, cost-efficient and environmental-friendly installation.

In general, an even and cool operating temperature on the sensor and more light, the better the image quality will be. However, more light produced by the camera may heat the image sensor, resulting in an increase of noise disturbance in the image. Axis Optimized IR technology gives the maximum possible amount of light at the scene combined with the minimum possible heat in the sensor, ensuring excellent image quality. Axis Optimized IR technology gives an even illumination across the entire image. The combination of the camera intelligence and the IR LEDs with their high-precision, custom-made lenses makes Axis network cameras with Optimized IR unique on the market. Axis network cameras are safe to use according to the European standard EN 62471:2008 based on the international standard IEC 62471. Since they comply with this standard it means that the cameras are not harmful to the eyes of any living creature that might look straight at the camera. 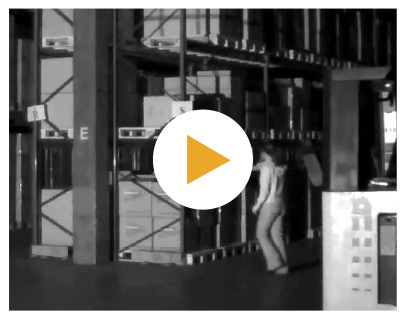 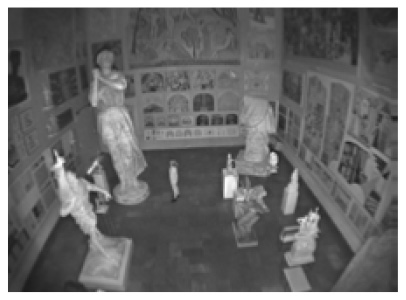 Thermal cameras have many advantages, such as allowing users to detect people, objects and incidents in complete darkness and difficult conditions such as smoke, haze, dust and light fog. Eliminating the need for flood lights, they reduce light pollution. In addition, a thermal camera is a reliable platform for integrating intelligent software applications. A conventional network camera reacts to changes in the captured image and can, for example, be disturbed by shades and back lighting. A thermal network camera detects the thermal radiation from the object, which is a more static parameter compared to visual changes in an image.

Axis thermal network cameras are an excellent complement to existing video surveillance installations as they expand the system’s video analytic capabilities. They can be used for perimeter and area protection, such as thermal fences, providing discreet and cost-effective detection, enhancing building security and emergency management. The sensor in a thermal camera detects thermal radiation emitted from objects and people. Thus, the sensor is not sensitive to changing light conditions, darkness or other challenging conditions. This makes thermal cameras a perfect platform on which to build more efficient 24/7 surveillance systems. Integrated with intelligent video applications, such as video motion detection or tripwire, the camera can automatically trigger an alert to the operator and at the same time trigger a pan/tilt/zoom camera to supply video to the operator. All information is evaluated and the operator can decide about the correct action to take.

When an Axis thermal network camera has detected a moving object as shown, it can trigger other devices and actions such as sending an alarm to an operator, turning on flood lights, or triggering a regular camera to retrieve visual information about the incident. Since the camera will only record during the actual incident, the amount of recording space will be minimized. This will facilitate video analysis and save valuable operator time. 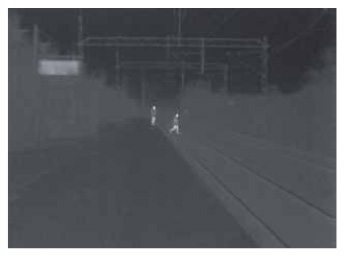 Example of an Axis thermal camera used for motion detection.

Edge storage is a concept in Axis network cameras and video encoders that allow them to record video directly to a storage device such as an SD/SDHC card. When integrated with video management software (VMS), edge storage helps create more robust and flexible video surveillance systems for mission-critical installations, remote locations, or mobile situations.

Edge storage allows a network video device to create, control and manage recordings either locally to an SD/SDHC card, or to network shares such as Network Attached Storage (NAS). Edge storage works as a complement to central storage. It can record video locally when the central system is not available, or continuously record in parallel. When used together with video management software (VMS), missing video clips resulting from network disruptions or central system maintenance, can later be retrieved from the camera and merged with the central storage, ensuring the user gets uninterrupted video recordings.

High-quality video recordings even if no network connection is available at the camera’s location.

Easy to retrieve on-board recording storage in mobile environments such as public transport.